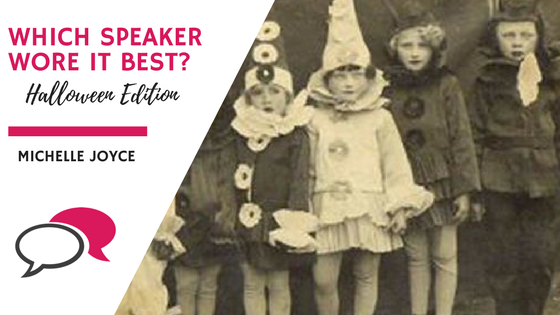 Ever wonder why we wear costumes and beg for candy on Halloween?

This fun and festive holiday has ancient origins dating back to the Celtic festival of Samhain (pronounced sow-in). The Celts celebrated their new year on November 1, so October 31 marked the end of their summer and harvest. That date also marked the beginning of the dark, cold winter – a season often associated with death for many people. Celts believed that on the night before their new year, the boundary between the worlds of the living and the dead became blurred, and that the spirits of the dead returned to earth. To avoid being recognized by these ghosts, people would wear masks when they left their homes after dark so that the ghosts would mistake them for fellow spirits.

And if simply avoiding ghosts on your night out wasn’t enough fun, trick-or-treating may be an offshoot of souling, which started in the Middle Ages.  Soulers, mostly children and poor adults, would go to local homes during Hallowmas (a combination of three Christian holidays: All Hallows’ Eve, All Saints’ Day, and All Souls’ Day), and collect food or money in return for prayers said for the dead on All Souls’ Day.

A secular version of souling, called guising, was first recorded in Scotland in the 19th century. Guisers went door to door and earned food treats or money by offering a small performance, like telling a joke or singing a song.  Today, one quarter of all the candy sold annually in the U.S. is purchased for Halloween.

In the spirit of treats, tricks, and costumes, we asked our speakers about their Halloween preferences. Always happy to play along, here’s what they revealed…

If you could present from the stage wearing any Halloween costume, what would it be and why?

Jay Baer:  Given my choice of suits, some people might say I already present in costume! But I would probably go with Mickey Mouse, because that was the costume my Mom always “made” when I forgot to tell her that I needed a costume until minutes beforehand. Mouse ears handband? Check. Whiskers drawn on my face with mascara? Check. Red shorts and black T-shirt? Check. Panty hose on my legs (yikes)? Check. I would wear that on stage today, and use it to bridge stories of my awesome Mom, and how my Dad moved us across the country based on a single beer, in an airport bar.

Colette Carlson:  I’d dress as a doctor. Why? Because all I’d have to do is roll out of bed, throw on scrubs, and pull my hair back in a ponytail. Less time getting ready leaves more time to connect!

Melissa Agnes:  I’d be Fairy Godmother because she’s there to empower, support, and provide magic to Cinderella – who is completely worthy. All companies are worthy of having an invincible brand; and it’s my deepest passion to help them achieve one.

Steve Gutzler:  I would present wearing the Seattle Seahawks coaching outfit, dressed like Pete Carroll. Pete is an incredible model of the power of emotional intelligence (the topic I love to teach audiences), and his positivity and resilient spirit is absolutely contagious!

Scott Shellstrom:  Leonardo da Vinci. It’s pretty obvious since my program is called UNLEASH YOUR INNER DA VINCI™, and I teach organizations how to unleash creativity and innovation.

Clint Greenleaf:  I’d have to go with Batman.  He has no super human power (check), but he shifts the fight in his favor by acquiring special tools and knowledge and relying on his team (Alfred, Robin, and Bat Girl). Entreprenuers aren’t superhuman either, but they work hard, build great teams, and have some cool toys.

Jay Baer:  It would NOT be candy corn, which is terrible. And it would NOT be circus peanuts, which are an abomination and make candy corn look like filet mignon.  For me, my favorite candy is DOTS. But the mini Halloween DOTS in the tiny boxes are never cellophane wrapped, so the candy is always hard and stale. So, for Halloween purposes only, I’ll go with my second-favorite candy:  Payday.

Colette Carlson:  Butterfinger, but I’ll eat anything covered in chocolate.

Melissa Agnes:  I’m not a big lover of candy, so I’d take a trick, over a treat, any day!

Steve Gutzler:  Hands down… not even close… my favorite Halloween candy is a Snickers Bar.  And I’m not talking about those tiny bite-sized ones; I’m talking the full-size bars!

Scott Shellstrom:  Almond Joy. By the time the kids start coming around our door, the variety pack has one less variety.

Clint Greenleaf:  I wish people gave out peanut butter on Halloween. Not inside of chocolate, but jars of HomePlate Peanut Butter. That would be awesome.  But in the absence of that major societal shift, I’ll go with Twix because they’re yummy.

To bring any of our speakers to your next meeting or event, please contact Michelle Joyce or visit www.MichelleJoyceSpeakers.com.  Costumes and candy are additional, upon request.

The Hybrid Future of Meetings and Events
August 24, 2020