A deep connection exists between America’s favorite pastime and America’s favorite peanut butter. And, with the first day of the 2017 Major League regular season in the books, it is only appropriate to shine some light on our keynote speaker and CEO of Homeplate Peanut Butter, Clint Greenleaf! 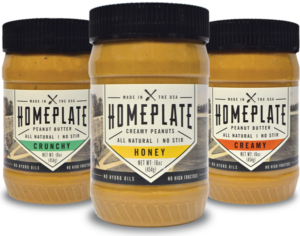 HomePlate Peanut Butter was created by a group of former professional baseball players who grew up playing baseball every day and ate a ton of peanut butter in the process. Their mission was to create a peanut butter that met the rigid standards set by the professional baseball players who make up the company’s founding team— natural, sustainable ingredients, no goopy oily layer, and no chalk texture were a must.

Our very own Clint Greenleaf is the current CEO.  But it’s not his first rodeo. Clint has initiated, grown, and led several successful companies – and he now shares those business growth best practices with audiences everywhere.

Fun Fact:  HomePlate Peanut Butter was selected as the official peanut butter of the Professional Baseball Clubhouse Manager’s Association and can now be found in the clubhouses of all 30 MLB teams. Pretty cool, right? Alright, alright, now book Clint for your next event and we will throw in his favorite peanut butter for you to try!